How to get here

Situated in the centre of Lewisham, in front of Lewisham Shopping Centre, the market is within easy reach of a number of rail, bus and DLR transport links.

Want to be a market trader?

The Monday to Saturday market attracts locals and visitors from miles around to its 64 stalls with items ranging from:

The Sunday market is a general market selling non-perishable goods. Contact the markets team using the details below if you would like to trade at Lewisham market. 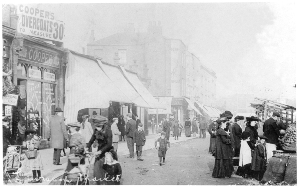 Lewisham market began in 1906 and is today one of a handful of six-day markets in London.

This picture taken in 1911 of Lewisham market was taken from the southern end, looking north towards Avenue Road, now replaced by the main entrance to the Lewisham Centre. In 1944, Lewisham Market was bombed by a V1 rocket which landed 100 yards from the Clock Tower and killed 56 people, injured 99 and demolished part of the High Street shops.