Berkeley Group's Marine Wharf West development includes 532 new homes, plus space for shops and businesses, with buildings ranging in height from one to eight storeys, and landscaping along the former route of the Surrey Canal. 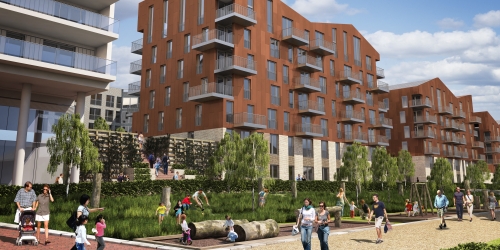 The redevelopment of this site, which adjoins Marine Wharf West, will create 183 homes and commercial floorspace in two buildings of up to 8 storeys.

A partnership between London Business Centres and Barratt Homes, this scheme – which is being marketed as 'Greenland Place' – includes 679 new homes (including two tall buildings of 20 and 23 storeys), a purpose-built business centre which is expected to create at least 80 new jobs on the site (25% more than previously), a children's nursery, and landscaping along the former route of the Surrey Canal.

The first residential block is now complete, while the first commercial units will be ready for occupation by summer 2015.

Planning permission has been granted for the construction of a five storey residential development of 33 new homes, which is in the process of being built.