New Cabinet team also confirmed at AGM - the most diverse and representative yet.
Website survey

We want your help with improving our website so it is easier to use, and provides the information that residents need. Help us by filling in this short survey. 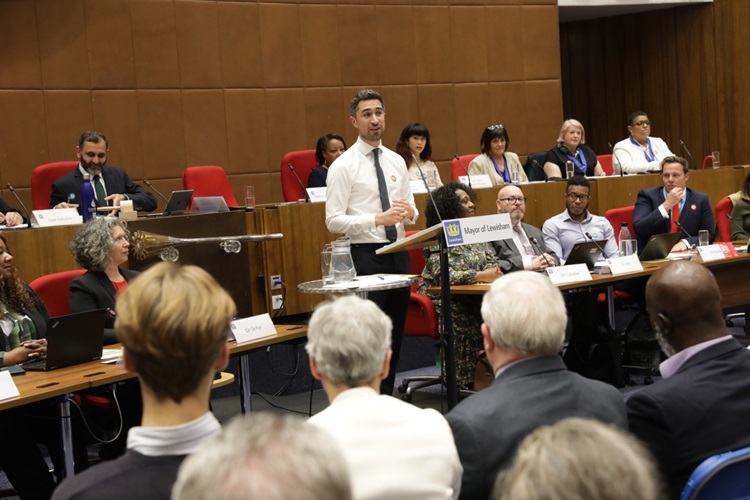 The Mayor of Lewisham, Damien Egan announced his Mayoral charity partner, Speaker and Deputy Speaker of the Council, and Mayoresses for the year at the Council’s AGM last night, Wednesday 25 May 2022. This follows on from his announcement of his new Cabinet team last week which was confirmed last night.

Following his re-election at the local elections earlier this month, the Mayor used the opportunity to voice his concerns over the cost-of-living crisis and thank outgoing councillors who had collectively served more than 281 years at Lewisham Council. He also welcomed new councillors, formally introduced his new Cabinet and set out his intentions to deliver the ambitious manifesto he was elected on.

Mayor Egan named Young Lewisham Project to be the first Mayoral charity in his first year of his second term and welcomed Anna Lumley-Noble and George Smith from the Project to the AGM. They shared that they worked with up to 350 young Lewisham residents each year, and offer a wide range of supportive alternative vocational programmes to young people who may not be achieving in mainstream education. They deliver projects, activities and trips that include practical skills such as motorbike mechanics and bicycle maintenance, woodwork, furniture restoration and upcycling, art and crafts, gardening and allotment work and cooking.

People at The Young Lewisham Project are encouraged to access other programmes and local services and to progress on to other courses within the project or to further education and work placements, or even go on to become paid employees at The Project or with other local youth service providers.

The Mayor also took the opportunity to welcome back Cllr Tauseef Anwar as Speaker and Mayoresses Dawn Atkinson, Natasha Ricketts and Christina Norman, and introduce Cllr Hau-Yu Tam as Deputy Speaker. The Mayoresses, who volunteer at the Evelyn Community Store, were first appointed in 2020 for their fantastic work to tackle food poverty in the borough.

Damien Egan, Mayor of Lewisham said, “I am delighted to announce that The Young Lewisham Project is our new charity. The Project are a small charity based in Perry Vale. They have been working with children who have been having difficulties for 45 years. Their projects with involve fun, practical activities and training for children. They run projects in carpentry and furniture design, food and catering and motorbike repair and mechanics. They’ve had real success over the years and I hope that with an extra boost of fundraising we can help them to reach more children.”

Cllr Tauseef Anwar, Speaker, said, “I am honoured to be nominated again by my colleagues to represent the Council as Speaker and continue to deliver the progressive agenda we have set ourselves as a party."

The Mayoresses said, “We are delighted that we get to continue in our roles as Mayoresses for Lewisham Council. We have worked tirelessly over the last couple of years tackling inequalities in the borough, specifically food poverty, now more important than ever with the increasing cost of living crisis.”

The Council’s new Cabinet team were also ratified at the AGM, with the Mayor saying he was delighted to work with such a talented and diverse team to deliver his manifesto, focusing on tackling inequalities, the climate emergency and the Council’s work as the country’s first Borough of Sanctuary.

You can watch the coverage of the AGM here.