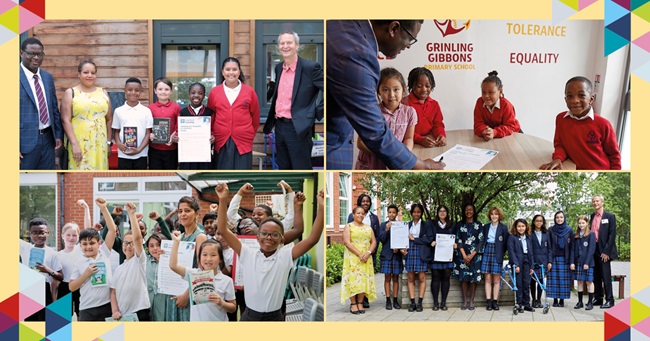 The pledge was drawn up as a result of research in attainment and outcomes for children and young people in Lewisham schools, and is the start of an ongoing piece of work, led by and part funded by the schools themselves. The research highlighted that Lewisham schools have a high percentage of Black Caribbean heritage pupils - 19% of primary pupils and 25% of secondary pupils - compared to 3% nationally (2019 data).  The research also showed that this group had the lowest achievement at the end of Key stages 2 and 4, mirroring the national picture.

By signing the pledge, the schools commit to working towards a number of targets, including reducing exclusions for Black Caribbean heritage pupils, targeting ambitious outcomes for this group and other minority ethnic groups, developing stronger relationships with parents and carers and improving Black representation in school leadership and governing bodies.

The work will include workshops and teacher training on unconscious bias and modernising the curriculum, leadership and governor support, and regular evaluation through pupil and staff surveys and focus groups.

Cllr Brenda Dacres, Deputy Mayor of Lewisham, and Cllr Chris Barnham, Cabinet Member for Children and Young People, visited Grinling Gibbons Primary School, Rathfern Primary School and Sydenham School (secondary) which were among the first schools to sign the pledge.They met with headteachers and pupils to learn more about the work happening in schools and what the pledge means to the school communities.

“We want all our children in Lewisham schools to have the best start in life, and education is significant in giving our students, regardless of their background, the ability to succeed, thrive and be inspired. It’s also important that they are proud of their heritage and their standing in our community.

“This is a subject that is close to my heart – as a former school governor I am all too aware of the challenges our young people face, and I know this work will improve outcomes for all children and young people in Lewisham, because if all are able to reach their fullest potential, then all succeed.

“We chose to launch this pledge on Windrush Day, as it holds great significance to Lewisham’s Black Caribbean community.Evidence has shown that for too long there have been disparities in outcomes for certain groups of young people, particularly Black Caribbean heritage and dual heritage (Black Caribbean/White) boys.This is of course not just an issue here in Lewisham, but across London and across the UK. Here in Lewisham we can make changes that can make a difference and that is why this pledge, and the commitment from schools and the council is so important.

“The Windrush generation are brave pioneers who have contributed to our community and our country, it’s only right that the generations that flow from them are embraced equally and can flourish. It is especially nice for me to be able to visit some of our schools and celebrate this important day with them.”

“Our children and young people are our future. We want them all to succeed, to achieve all that they can, and to seize the opportunities available to them in the modern economy, and the world city that is London.

“This is an important piece of work for all of our children, but especially for Black Caribbean heritage and dual heritage (Black Caribbean/White) children, who we want to see achieving as well as any. We are proud of our school leaders in starting this work and ensuring this is just the beginning of bringing about progressive change to our education system and curriculum.

“We are determined that Lewisham Council leads in actively tackling race inequalities across all areas, and our schools are key to this.  We know that our school communities and residents want to see this happen too.”