Bringing the Bakerloo line to Lewisham and beyond

The Mayor of London is proposing to extend the Bakerloo line from Elephant and Castle to Lewisham, with a potential further extension on to Hayes.

Transport for London (TfL) has set out plans to extend the Bakerloo line.

The extension would go from Elephant and Castle through to Lewisham via New Cross Gate, and all the way to Hayes.

It would transform the lives of thousands of people who live and work throughout the borough. 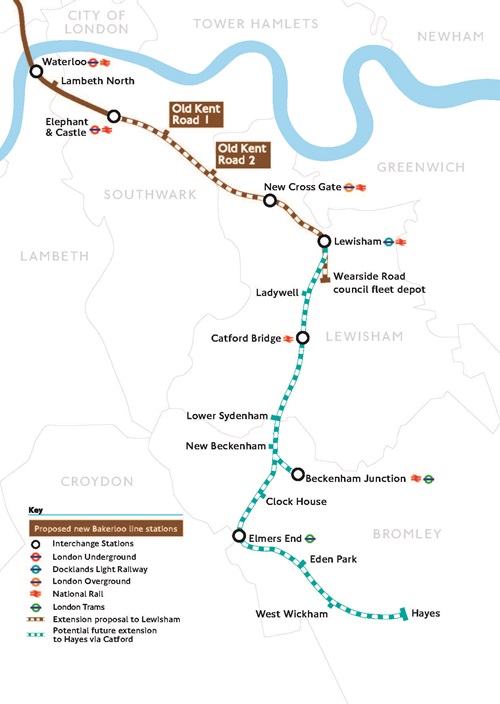 What the Bakerloo line extension would mean for you

The Bakerloo line extension would bring undeniable benefits to the borough of Lewisham. These include:

How you can help to get it built

You can show your support and help get the line built.

TfL’s third round of consultation is open until 22 December.

You can give your views on the most detailed proposals yet for the extension.

Give your views online

You can fill in the online survey. The survey asks whether you support the further extension beyond Lewisham to Ladywell, Catford and Lower Sydenham.

Go to a public information day

You can speak to TfL staff to find out more about the proposals at public information days to be held at 11 different locations along the proposed route. The Lewisham-based events include the following locations:

If you’ve already signed the petition

If you have already signed the Back the Bakerloo petition, you can also help by responding to TfL’s consultation.

The petition shows your support. But the consultation lets you:

Online petition to Back the Bakerloo

The Bakerloo line extension is not yet a done deal.

Working together with Southwark Council, we are campaigning for the funding and powers to get the Bakerloo line extension built. We need your support to help make it happen.

So far, the Back the Bakerloo campaign’s petition has reached 20,000 supporters.

To further grow this number, and for more information on the new line, please sign the Back the Bakerloo petition.

Joint letter to the prime minister

We also coordinated a joint letter with Southwark Council, sent on behalf of a cross-London coalition of council leaders, MPs and business groups.

The letter called on the prime minister to get behind the project and ‘Back the Bakerloo’.

Find out about development opportunities in the borough along the proposed Bakerloo line route in our Direction of Travel Document.