Former Mayor of Lewisham Sir Steve Bullock, DL and former Mayoress of Lewisham, Kris Hibbert, have been awarded Freedom of the Borough of Lewisham. 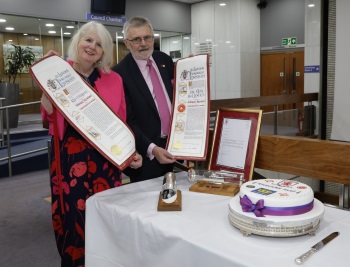 At a special meeting of the Council on 24 July, Sir Steve and Kris became the 16th and 17th people to receive Freedom since the London Borough of Lewisham was formed in 1965. They were nominated in recognition of their long service to the borough and its residents over many years.

Sir Steve was Lewisham’s first directly elected Mayor, serving for 16 years from 2002 to 2018. As Mayor of Lewisham, he created Lewisham’s Young Mayor programme, which has been emulated across the country and Europe, led the Council’s response to save Lewisham A&E and ensured every secondary school in Lewisham was rebuilt. He was previously a councillor for Bellingham between 1982 and 1988, serving as Chair of Finance, Chair of Leisure and Deputy Leader of the Council. He served as Leader of Lewisham Council from 1988 to 1993.

Kris served as a local councillor from 1982–1990. She was a pioneer and helped to set up the Women’s Committee, the first local government committee on women’s issues in the country. She also served on many of the Council’s other committees including police, leisure, employment and industry.

Kris also led the fundraising work for the Lavender Trust charity. Her commitment saw Lewisham raise £225,000 to support younger women with breast cancer. Kris has also been a Lewisham school governor for 29 years and currently serves as Vice Chair of the Lewisham School Governors’ Association.

In presenting Sir Steve and Kris with the Freedom of the Borough, Damien Egan, Mayor of Lewisham, said: 'Awarding the Freedom of the Borough is the greatest honour that can be given in Lewisham and I can think of no better people who deserve it more than Steve and Kris. They are fantastic ambassadors for Lewisham and this is a fitting way to thank them for all that they done over the years.'