is now open to the public. The Surrey Canal Linear Park runs alongside the former route of the Surrey Canal from which it takes its name. It was created with money raised through the new 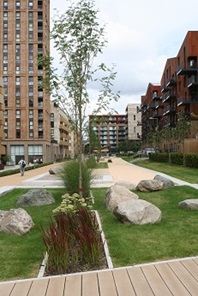 developments at Cannon and Marine Wharf and Deptford Wharves.

The architects behind the new park, Landscape Partnership, consulted with local residents in February 2015 to get their thoughts and feedback on proposed designs. This resulted in a new park that is providing a key focal area for the local community, giving children and young people a great outdoor space to play, whilst maintaining original features including artwork along Oxestalls Road.

Construction on the new park was carried out by Contractor T Loughman & Co.

Developers Lend Lease plan to fund future works that will include opening up the former canal bridge, allowing the linear park to extend under Oxestalls Road to connect the Deptford Wharves development to the route.