Each year more young people in London are stabbed – and many lose their lives – due to knife crime.

Carrying a knife for ‘protection’

Some young people feel they need to carry a weapon to protect themselves from gangs even if they have no intention of ever using it. However, statistics show that far from giving protection, by carrying a knife you are much more likely to be stabbed yourself 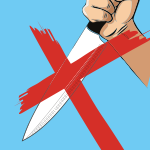 Watch this video on the consequences of carrying a knife

If you carry a knife you are putting your life and your future in danger. Carrying a weapon to protect yourself is still a crime and can carry a prison sentence of up to four years even if you don’t use it.

It is illegal to: