​We have historical ties, known as 'twin towns', with three places around the world.

Antony was the first place in the world to be formally twinned with us in 1962, when Deptford was a separate borough.

The area, just South of Paris held a celebration in honour of the 50th anniversary of the twinning in 2012, attended by the Chair of Lewisham Council.

There have been many links between residents over the years including a friendship that has lasted fifty years!

Resident who started a friendship with a resident from Antony in 1963 as part of the twinning process.
Those early links between France and England fostered a greater understanding of each other's cultures and have endured for half a century. We started corresponding as school children and are are now both grandparents. We regularly visit each other and have remained the best of friends.

More recently, the Young Mayor’s team were invited to visit the Youth Council of Antony to share ideas and approaches to young people. 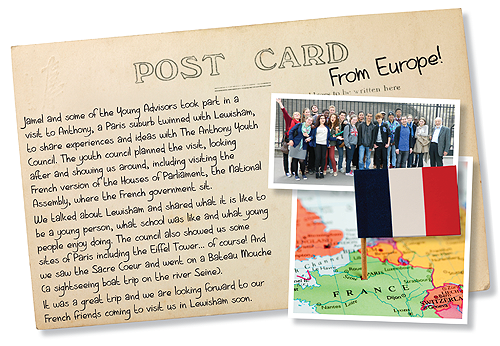 We were officially twinned with Charlottenburg, before it merged with Wilmersdorf, in 1968.

Residents in both areas have been involved in numerous projects that have facilitated community groups to share ideas and experiences.

This has included a football exchange in 2009/10 between Charlottenburg and Lewisham Borough Community Football Club, and the Hugo Distler Choir from Charlottenburg singing with the Blackheath Choir at Blackheath Halls in 2005 (pictured).

In 1987, during the Sandinista Revolution we became linked with Matagalpa in Nicaragua.

We were twinned with Matagalpa after a vote at Council on 28 October 1986 to support the democratically elected Sandinista government of Nicaragua.

St. Swithin's Church in Hither Green already had links with a church in Matagalpa and it was decided to build on those links. The support continued when we raised funds for Hurricane Mitch, a devastating storm that hit Central America in 1998.

We are an official Fairtrade borough and are committed to supporting Fairtrade for better prices, decent working conditions, local sustainability, and fair terms of trade for farmers and workers in the developing world.

Lewisham is committed to supporting and using products with the Fairtrade Mark.