A new action plan to help boost biodiversity, protect the borough’s wildlife, and create a greener Lewisham has been endorsed by Lewisham Council.
Website survey

We want your help with improving our website so it is easier to use, and provides the information that residents need. Help us by filling in this short survey.

Councillors voted at a meeting last night to endorse the Lewisham Biodiversity Partnership’s (LBP) new action plan ‘A Natural Renaissance 2021-2026’, which sets out how LBP will work with the Council, the local voluntary and community sector and other partners over the next five years to help protect local wildlife, plants and natural habitats. 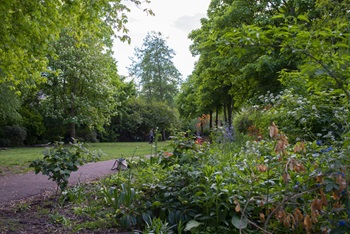 The Council works closely all year round with the Lewisham Biodiversity Partnership, which brings together a diverse range of organisations, volunteers and individuals with a shared interest in improving and protecting biodiversity in the borough.

The Partnership’s plan proposes a number of actions that LBP will take to support the Council’s work to create a greener Lewisham – the majority of which will be delivered by local volunteers. These include:

These steps will support the Council’s delivery of its new five-year Parks and Open Spaces Strategy, which aims to make local parks and green spaces even better by placing a greater focus on creating local havens for biodiversity, improving volunteering opportunities and supporting residents – including young people – to be more closely involved in decision-making.

Protecting and enhancing local biodiversity plays a key role in the Council’s wider work to make the borough carbon neutral by 2030, which includes rolling out 26 School Streets to support children to walk and cycle to school, working with residents to develop a framework that aims to make Catford the greenest town centre in London and launching a Greening Fund to support local community groups who are protecting and enhancing Lewisham’s green spaces.

Cllr Patrick Codd, Cabinet Member for Environment and Transport, said: “This action plan sets out a clear vision that will help protect and enhance our existing green spaces and rivers, transform urban areas into eco-friendly havens for local biodiversity, and create a greener borough that’s teeming with local wildlife.

“None of this work would be possible without volunteers, who are the backbone of the local response to the ecological crisis – and I would like to give a huge thanks to every single resident and community group involved in these efforts.

“We look forward to continuing to work with the Lewisham Biodiversity Partnership and our communities to help deliver the actions set out in this report. It goes without saying that reversing the damage that has been done to our planet as a result of the climate crisis will be no easy task – but by working together, we can help to create cleaner air, healthier neighbourhoods and a better world for all of us.”

Mike Keogh, Chair of the Lewisham Biodiversity Partnership, said: “Biodiversity is inextricably linked to climate change, and as such, the conservation of our borough’s natural habitats is critical to addressing the climate emergency and protecting the environment for future generations.

“As an inner-city borough, Lewisham needs as many natural habitats as possible to ensure that wildlife can migrate, survive breed, adapt and evolve - including parks, green spaces on estates, gardens, rivers and green roofs. This action plan sets out how the many partners involved - including the Council, volunteer groups, individuals, contractors and bodies - will work to create a more wildlife friendly borough and help tackle the Climate Emergency.”

Find out more about how Lewisham Council is addressing the climate crisis.

You can help improve Lewisham’s biodiversity from your own home! The Council has produced a step-by-step guide as part of its new Climate Conversation campaign, which aims to help residents make eco-friendly changes in their daily lives, such as cutting down on meat and dairy products, choosing to walk or cycle short journeys instead of driving or joining a local community gardening group.

We have committed to protecting and enhancing the parks and open spaces in the borough – but most of the green space in Lewisham is in residential gardens. That’s why the Council is encouraging residents to get involved with the biodiversity action plan and think about how our gardens can be transformed to attract more wildlife.

Share your views or photos of your climate action on social media using these hashtags: #climatechat #onestepgreener or email the Council directly at climate@lewisham.gov.uk