Progress of the Lewisham Gateway development

Information about the largest current development in Lewisham town centre.

The Lewisham Gateway Development is a private development led by Muse Developments and private rental company Get Living PLC. It is supported by the Greater London Authority (GLA), TfL, and Lewisham Council who provided the land for the development.

The scheme has so far involved the removal of the roundabout opposite Lewisham's railway and DLR stations. This has been replaced by a new road layout and the Phase I development. Full completion of Phase II will make it easier for pedestrians to get back and forth from the stations to the town centre via the development and provide access to the amenities on offer.

Benefits to the community

Lewisham Town Centre will benefit from the following environmental enhancements and new amenities that will also result in future job opportunities for the borough’s residents. These include:

The first phase of Lewisham Gateway has now been completed. This involved the redevelopment of land close to the stations. (Until very recently, this land was also the location for the bus stand. The bus stand has now relocated to a purpose-built facility on nearby Thurston Road.)

This phase saw the construction of 'Building A' (marked with an 'A' on the site plan below) along with landscaping to the adjacent area to create a new public realm and public park. 'Building A’ provides 193 new private homes, along with ground-floor shops, a public park (Confluence Place) with children’s play space, and restaurants and cafes. Block B provides a further private 169 homes.

This phase included the major infrastructure improvements to the roads and rivers, which include the removal of the Lewisham Northern Roundabout and the implementation of a new highways system.These will in effect create the rest of the Lewisham Gateway site. 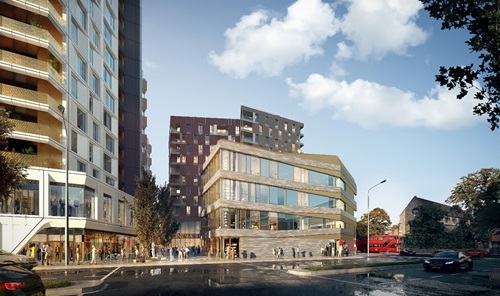 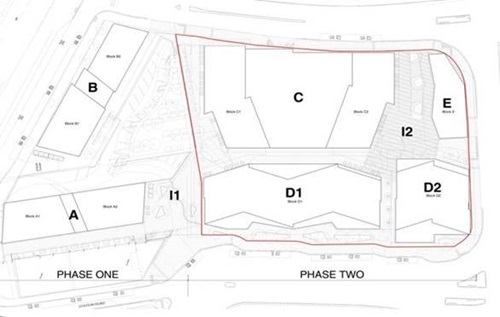 On site construction has now begun for the second and final phase of Lewisham Gateway, which will include the construction of 649 homes for rent, office and working spaces, and leisure facilities including a gym and multiplex cinema.

Alongside 106 affordable homes and 424 market rent homes, will be 119 co-living homes. These are smaller self-contained studio-style homes with shared communal facilities that are distributed elsewhere in the building, usually on the floor above the apartment. The homes will be approximately 25m sq. and will be therefore cheaper to buy and maintain than a standard apartment.

The GLA have provided a Housing Infrastructure Funding grant (HIF) to help enable the project and the scheme has further benefited from Section106 funding, Section 106 agreements are negotiated between a developer and a council to help ensure that new developments deliver benefits to the local community. It can be used to help fund affordable housing. In this case the local Loampit Vale development provided the Section106 contribution. This has enabled 106 affordable homes within the Phase 2 development. It is hoped that the scheme will act as a catalyst to encourage further development within the borough.

Completion is anticipated in 2023. Find further details on the Lewisham Gateway development.