Plans to transform the site of the former Catford Constitutional Club have received a boost after being awarded £1.65 million by the Mayor of London’s Good Growth Fund.

The scheme, which forms part of a longer-term ambition to regenerate Catford town centre and bring community assets back into use, was selected as part of the Mayor of London, Sadiq Khan's, £70 million regeneration programme to support growth and community development in London. 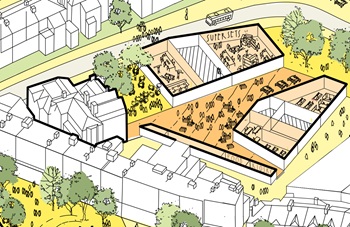 The locally listed, Victorian building, in use as a pub and community venue was forced to close in August 2019 due to structural and safety issues. The building and surrounding site including the Thomas’ Lane car park are owned by Lewisham Council, and under the proposals, it will be restored and connected to a new public space, Thomas’ Lane Yard.

The space will create new employment opportunities including facilities for market traders and work space offered at reduced market rent to small and medium sized enterprises.

The Good Growth Fund puts local communities at the heart of regeneration and enables Londoners to actively participate in their local community and have a say in how the project is shaped. The next step will be to develop the proposal with local residents and partners at a series of community engagement events.

“Lewisham is creative, forward-thinking and we’re proud to have so many small independent businesses. Thanks to the Mayor of London, we can now restore the building, bringing back the pub and including community space.”

“The regeneration of Catford offers huge opportunities for our local community. It will mean more good quality jobs, and more of the social housing that we need.

“This funding from the Mayor of London will help bring an historic pub and community asset back into action, and provide high quality affordable workspace for local small businesses. It’s great news for Catford, and great news for Lewisham.”

“The Mayor and I are committed to doing all we can to support projects which create opportunities to regenerate their local areas. This is a great example of how Londoners can take a lead in shaping the future of the capital.”